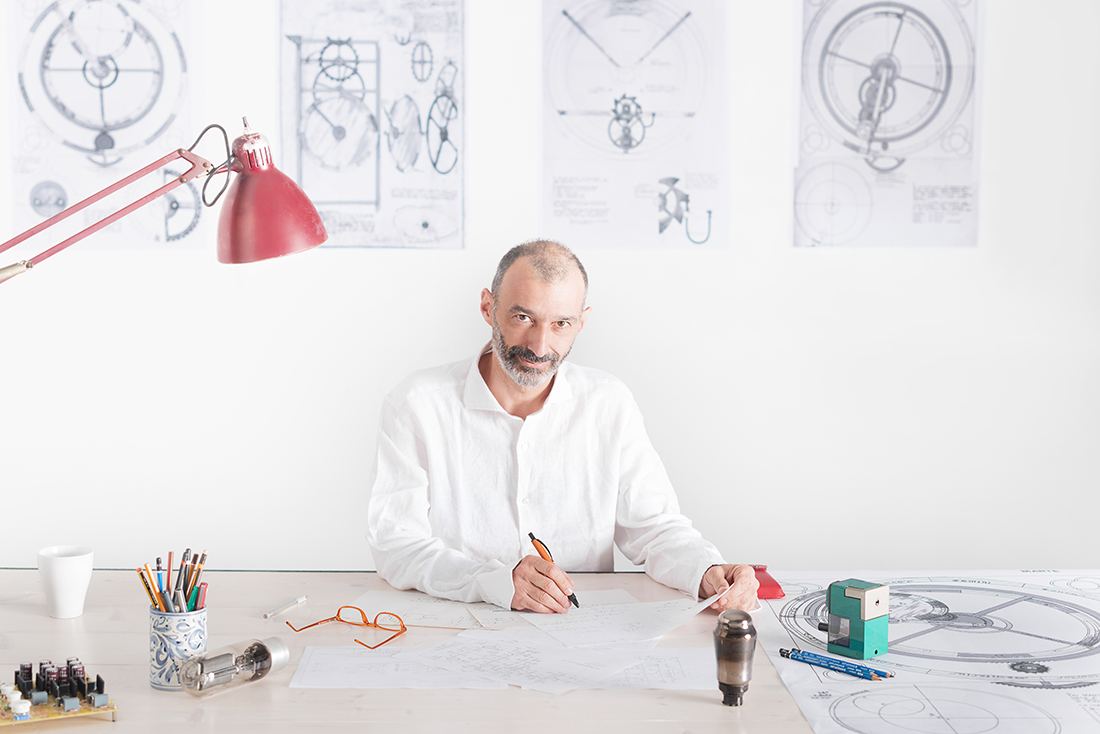 I have always had a passion for music, mechanics and electronics, as well as for anything technical since I was at secondary school. Following completion of my electronics engineering academic path at the Milan Politecnico University I have been working in the audio sector as a designer since the early 1990’s.

My theoretical interest in particular aspects of sound reproduction has lead me to deepen my research into the correlations between the behaviours of electronic and electroacoustic devices and those of biological and neurosensory systems, the results of which have already been applied in several past cooperation experiences.

Mechanics definitely represents my first passion: motorbikes, cars, (I have always personally looked after both ordinary and “extraordinary” maintenance of motorbikes) and, above all, horology. I have studied and researched, with an uncle of mine who is quite unconventional, the mechanisms of many particular and antique watches, even astronomical ones (I have worked a lot in the past on the Astrarium of Giovanni Dondi) until meeting a great master horologist: Adelio Biancheri from Ventimiglia.

I love image, intended as drawing and photography, having actually been brought up with them with my father as a teacher.

I love the sea and sailing. Great passion of the past, which I used to practice a lot, today being close to sea for me remains a must: just looking at it is enough but I couldn’t even imagine living far from the sea.

And of course, music. From Rock to Jazz, Italian music and, above all, classic antique and baroque music.

Yoga, with my own first experiences around 1990. A long break, then 15 years to understand the importance of a teaching guide, by no means affecting my ongoing curiosity and eagerness to experiment and discover, which are two key components in all fields. I started again in 2005 and have never stopped since. In 2015 I became a certified lyengar Yoga teacher.

My first professional experiences in the audio field date back to 1990-91 when I collaborated with Bartolomeo Aloia for several jobs on SS and valve circuits including testing and tuning of an automatic servo-control BIAS system for solid-state power amplifiers.

A very important industrial experience was for me the conception and planning of audio circuits for Galactron amplifiers (Line 2000) in 1993, an absolute innovative type of MOSFET audio amplifiers for that time. Later (1994-95) I have also been in charge of setting up and running the entire production of about 1200 devices.

Between 1993 and 1999 I worked with and acted as a consultant for a number of companies in the audio, electronic and electrical fields (transformers)

After 2000 I reduced my collaboration with external companies but between 2004 and 2009 I had the opportunity to project and follow up the production of two lines of valve audio amplifiers for SAP (Anniversary and Dolcevita, which included line preamps, phono preamps, integrated and power amplifiers) and electrical power supply systems. I have also actively contributed to plan and develop other specific projects.

In 1999 I created the Kiom brand to study, design and produce handmade audio systems of absolute reference. The range includes tube amplifiers, high efficiency loudspeakers, special components, handmade cables and systems for the treatment and optimization of the electrical power supply.

Beyond the audio field, I have had the opportunity to work on energy management and electrical drive systems, both in the past (late 1980`s – early 1990`s) contributing to develop and produce electric powered mini cars , and more recently collaborating with Bermuda Design, Terramodena ed Ergonsystem.